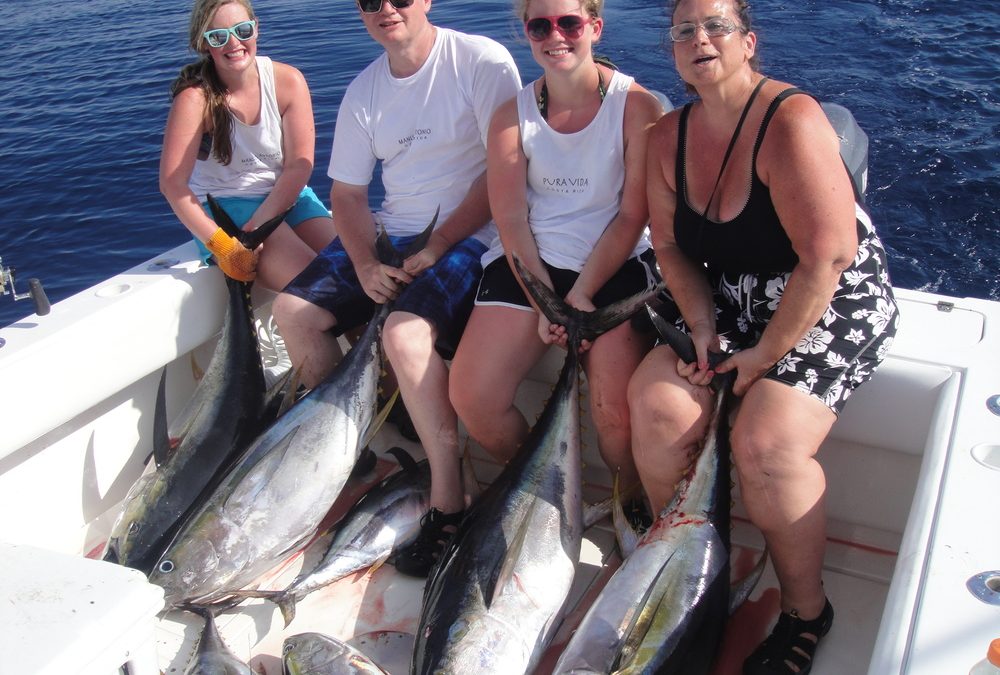 Two oceans, magnificent inland lakes and countless miles of pristine rivers provide anglers in Costa Rica with some of the finest and most diverse fishing you’re likely to find in such a small and easily accessible area anyplace in the world.Costa Rica’s reputation for incredible fishing is well justified, but like anyplace in the world, there are never any guarantees.

Action will vary with the seasons and prevailing wind, weather, currents and other natural conditions at any given time, and the following break-down, should be considered only as a general guide. Visitors will be well advised to check on what’s happening shortly before their trip. Costa Rica’s reputation for incredible fishing is well justified, but like anyplace in the world, there are never any guarantees.

The Pacific Coastal region is divided roughly into the Northern, Central and Southern fishing areas, with conditions varying with the seasons in each area. Increasing numbers of charter boat operators on the Pacific have been “following the fish” in recent years, moving operations from one area to another depending on the season and making it possible to assure visiting anglers the best fishing available whenever they choose to visit.

NORTH PACIFIC
From Cape Blanco to the Gulf of Papagayo, Flamingo Beach with a full-service marina is the biggest  Sport fishing in the area on the north coast, but there are also hire private boats near the Coco Beach, Tamarindo, Ocotal, Potrero, Brasilito and some smaller places between them.

A little further south, there are boats operating in Cape Blanco, Nosara, Garza, Samara and Carrillo, a region that has higher protection from the winds that normally blow at the end of December to March or April. Some boats further north often are based in Playa Carrillo from December to March, when the wind has dropped and the people of “billfish” moves north from the area of the central coast.
Seasons

Fishing throughout the year, but in mid-November and early March is particularly unique and a little from late April to early June where returns are to climb a peak in August and September.

Sailfish
Captured throughout the year, from March to August is when the season reaches the ceiling. It begins to decline in September and the end of August until November.

Tuna
The best time is probably from August to October, but when all else fails, there’s always tune in any time of year that you look, and when you and want to escape, you can concentrate in “billfish.” The yellowfin tuna and some big eye can be found, sometimes in the Santa Catalina islands to 30 minutes or less from the beach, while schools from 12 to 20 pounds can be abundant offshore. They often find concentrations of tuna from 40 to 60 pounds, and there is abundant fishing from 200 to 400 pounds caught each year.

Wahoo
They start to appear at about the same time that the rain in May, the highest peak is from July to August. Most are caught near rocky points and islands, but it could catch any occasionally offshore.

Roosterfish
Available all year, but where it is most fish is in the Gulf of Papagayo from November to March. Or maybe it’s because there are more fishing boats north during the windiest months near the beach. Roosterfish likes the islands and shoreline where you can find depths of 50 to 60 feet.

Central Pacific
From Cape Blanco to Drake Bay, the main fishing on the Pacific Coast is Quepos, but there is an availability of charter (private rental) in Puntarenas, resorts south of the Nicoya Peninsula, Punta Leona, Jacó Beach, and Drake Bay. “Billfish” is the goal of most fishermen, but could disappoint a little at the time from December through April.
Some sailfish and marlin are caught throughout the year. For most of the areas mentioned above to no more than 12 to 20 miles of trail in blue waters is where most of the action with the “billfish.” Fishing close to the edge of the beach includes tuna, roosterfish, gold, jacks, wahoo, mackerel, cubera, a variety of smaller snapper and snook up.
The snook can be fished with pulley just outside the broken line from the mouth of a river, but they are most often fish from the beach. Some boats on the outskirts of Quepos also offer tours of various days at Drake Bay and the area of Caño Island, passing the night in some small centers lodging near the Drake Bay. This Region is better known for its wahoo, big cubera, and roosterfish, but also for its tuna, dolphinfish, some marlin, and sailfish.

October is normally the monthly cap for marlin in this area, but the action is also good in September and November and occasionally rare blue and black can be found at any time of year. Usually, these are far more than what the owners of the boats like to go fishing.

Sailfish:
From mid-December to late April, when it began to move northward, this is the best temporary, but the big schools often move in October and occasionally stay a little longer. A few sailing always remain stragglers to catch them from June to September, mixed with other species that are found near the beach in those months.

Tuna:
Located throughout the year and all along the Pacific Coast, but more abundantly from June to September. Above all 8 to 12 pounds, but there may be a dozen or maybe two, which range from 100 to 200 pounds, which may be fish each year.

Wahoo:
It is common in the area near Quepos, but it is most abundant in late summer further south, especially in the Bay Drake and the Caño Island, in the time from June to early August.

Gold: The best action starts with the winter rains that begin in late May and cleans depojos the lines of the mouths of rivers that golden enjoy.

Pez Gallo:
Succeed in the hard fishing of this beach species is incredible, where the best places are rocky or in the River mouth of the rivers; especially the mouth of the Parrita River, Palo Seco, between Parrita and Damas just outside the Ladies, at the mouth of the Orange River, near the points of Sunday and throughout the Bay Drake and the áreade Caño Island. The best fishing is from June to early September.

Snook:
The most desired are right on the river mouths along the coast, up in Rio Sierpe and the large gap Sierpe.
The world record of fishing for snook black IGFA the Pacific was made in July at the mouth of the Orange River in a boat with pulleys, just outside of the line breakage. This is a relatively new target for rent small boats, but the best months appear to be from July to November, as stronger during the rainy season.

South Pacific:
Golfito and Playa Zancudo
Golfito is the largest city on the southern coast of Costa Rica, but there are only half a dozen operators divided between the northern part of the Golfo Dulce, Golfito, Puerto Jimenez on the Osa Peninsula and Playa Zancudo. Zancudo is a narrow peninsula with miles of beach on the side of the ocean and is surrounded by various rivers on the other side. You can expect to lift more than a dozen sail and fish alike a marlin or two on the outskirts of Cape Matapalo during the high season, there are also abundant “jacks”, “runners”, mackerel, amberjack, snapper and roosterfish large in the vicinity of the

Coast. There are two modern marinas in Golfito, both offer special trips fishing, as well as facilities for yachts that are passing.
There are slight shoals fishing within the Golfo Dulce, with these provisions of small caves and rocky islets and the coastline, which is good for small barracuda and snapper, croaker and occasionally snook of more than 40 pounds.
It is also excellent fishing for snook in the area of the peninsula Zancudo and further north at the mouth of River Corners.
Seasons

Marlin:
From August to December is the peak of the season, but occasionally “striped”, blue or black can be captured in any month that the water temperature is high.

A few can be caught throughout the year, but the best fishing occurs from December to March. Low often in April and September.
Tuna: The best fishing for 100 pounds of yellowfin tuna up to the station marlin and sailfish, but schools of more than 30 pounds can always be found offshore.

GoldFish:
Best Traditional bullfighting is from May to October when the rivers are full.

WahIt
here is abundant, but occasionally fish can be found at any time during the year with hile fishing beach is for the “billfish” near Cape Mata Palo.

Roosterfish:
This region is famous for its large rooster fish and fish can be in virtually any month of the year.

Snook:
All year, but better at the middle and end of May until July and January and February.

Fishing along Costa Rica’s Caribbean coast can vary more from one day to another than from month to month. Historically, tarpon fishing is promoted by the lodges on Costa Rica’s east coast from about December through mid-May, when the rainy season normally starts, while snook are said peak from about September through November.

Canals and rivers in the northern Caribbean coast can boast of the best fishing for snook and tarpon world, and is outlined with lush rainforest, which is added to this natural experience. The tarpon have an average of 80 pounds in the Caribbean and although the channels are smaller snook are good peleadores what they know best. There are about half a dozen lodges for anglers located in Barra del Colorado, Tortuguero Parismina, particularly in the channels, and the house boat “Rain Goddess” offers a quiet adventure that allows fishermen to fish in the canals, rivers and some hidden lakes.

Tarpon: They are always close, with the traditional high season from December to May, but a few years ago when all shelters were fishing in boats 16 feet and could not get out of the mouth of the river, not as they do today with more boats Long designed for that purpose.

Snook: Big snook usually rebound from March to May and September until the end of November.

Fat Snook: (Calba) can be found from mid-November to late January, but often appear soon.

Billfish: When you can go out on the blue water, you will find the Atlantic blue marlin during almost any time of year. Most fish are from February until September.

Gold: You can fish on the outskirts of the river mouths throughout the year. The best fishing is when you drag the sediments that form on the beach and brings a line of garbage.

Triple Tail: From January to June.

Lake Arenal is easily the most popular inland fishing water. Located about a four-hour drive from San Jose, it is Costa Rica’s largest fishing lake, and it’s loaded with guapote, or rainbow bass, a member of the cichlid family that displays the shadings of a rainbow trout and is fished as you would for black bass, but is related to neither.

News about Rent a Car in Costa Rica

Create a website and earn with Altervista - Disclaimer - Report Abuse